Article 1 (Application of Terms of Service)
“FARO Website” (below, “the Website”) is a site administered by Shiseido Parlour Company, Limited and Shiseido Company, Limited (below collectively referred to as , “the Company”).
FARO Website Terms of Service (below, “the Terms of Service”) prescribe basic matters concerning the use of various services (below, “the services”) provided to either members or nonmembers through the Website.
The Terms of Service apply to all users and members who use the Website services (below collectively referred to as “users”).
Article 2 (Definitions of users and members)
Regardless of whether the Company can identify individual users, all persons using the services are deemed to be users.
Article 3 (Consent to Terms of Service)
When a user has actually used the services, they are deemed to have consented to the Terms of Service.
Article 4 (Devices etc. required for use of services)
Users are responsible for devices, communications equipment, software, and other equipment (communications charges) etc.
required to receive the services.
Article 5 (Notification/alteration of Terms of Service)
The Company may voluntarily alter all or part of the Terms of Service without notifying users in advance. In such a case, the Company will issue a notification of the alterations through the Website, and the alterations will take effect as soon as the notification is posted on the Website.
Article 6 (Prohibited conduct)
The Company prohibits users from engaging in (including encouraging or preparing to engage in) the following conduct during their use of the Website:
Article 7 (Responsibility for use of information supplied through the Website)
The Company does not guarantee the integrity, usefulness, etc. of information users obtain through the Website, such as information posted by other users. Moreover, users are personally responsible for their decision to use the Website, and the Company assumes no liability for any outcomes resulting from users using or trusting this information etc.
Article 8 (Copyrights and other intellectual property rights)
Article 9 (Changes in, additions to, or termination of services)
Article 10 (Third-party websites)
The Company assumes no liability for losses resulting from the use of websites managed/administered by third parties to which links are posted on the Website, and has no obligation to provide compensation for such losses.
Article 11 (Handling of personal information)
Article 12 (Waivers and compensation for losses)
Article 13 (Website security)
The Website protects the personal information of customers by employing highly secure technologies and maintaining a high level of security.
Article 14 (Use of Cookies)
Article 15 (Links to the Website)
Article 16 (Governing law and court of jurisdiction)
The interpretation and application of the Website and the Terms of Service is based on Japanese law. Moreover, unless otherwise prescribed, the exclusive and mutually-agreed court of jurisdiction for the first hearing concerning all disputes pertaining to the Website is the Tokyo District Court. 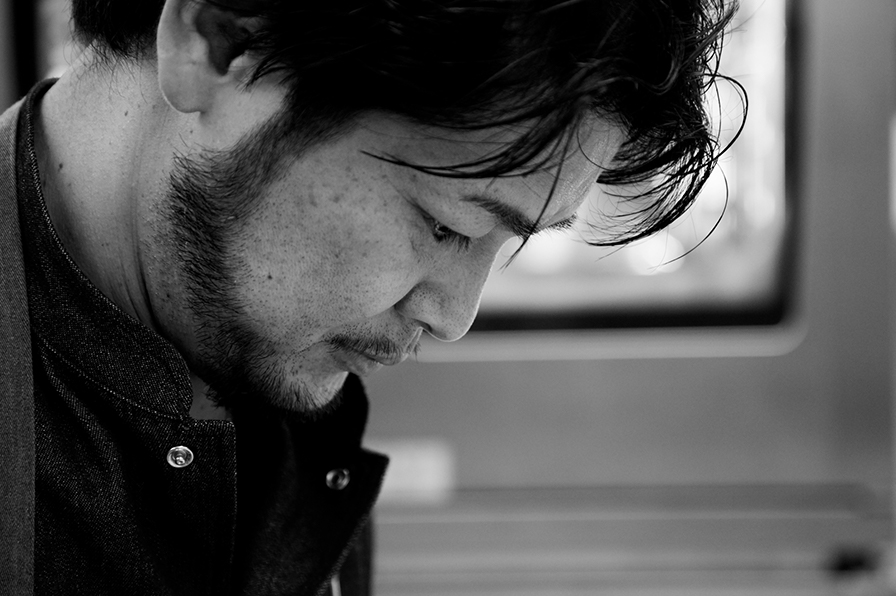 Born in Ehime Prefecture.
Moved to Italy in 1999.Active as a chef in Italy after apprenticing at well-established restaurants.
Returned to Italy in 2013 after working for first-class Nordic restaurants such as Noma in Copenhagen. At “bistrot64,” which he jointly operated in Rome, he supported its popularity with its neo-bistro style. Won one star for the second time in Michelin Guide Italy 2017 in November 2016 becoming the first Japanese Italian cuisine chef gaining Michelin recognition twice. Represented Rome in the final Taste the World Competition (Abu Dhabi) in 2017 and won the competition.
At Faro in Ginza, Tokyo, he embodies what he has fostered in Italy in the Japanese culture of cherishing ambience and taste of each season. It is in a way art to create, through the sensitivity of himself and the power of his team, a restaurant that is enjoyable for all diners.

Born in Tokyo.
Having an interest in design, fine art, modern art and craftsmanship, she chose to pursue the path of pastries/confectioneries within the field of food. For about 10 years, she worked as the pastry chef at established Michelin-starred restaurants in Italy, such as “Il Luogo di Aimo e Nadia”, “Il Marchesino”, “Mandarin Oriental Milano” (Milan), and “Osteria Francescana” (Modena). She worked in the chocolate department of Enoteca Pinchiorri (Florence).
She now proposes desserts reflecting respect for Japanese herbs and other blessings of nature, aiming at a restaurant that remains in people 's memories just like special experiences occurring during journeys.She is vigorously involved in the development of dishes with obsession even with ingredients including homemade yeasts. 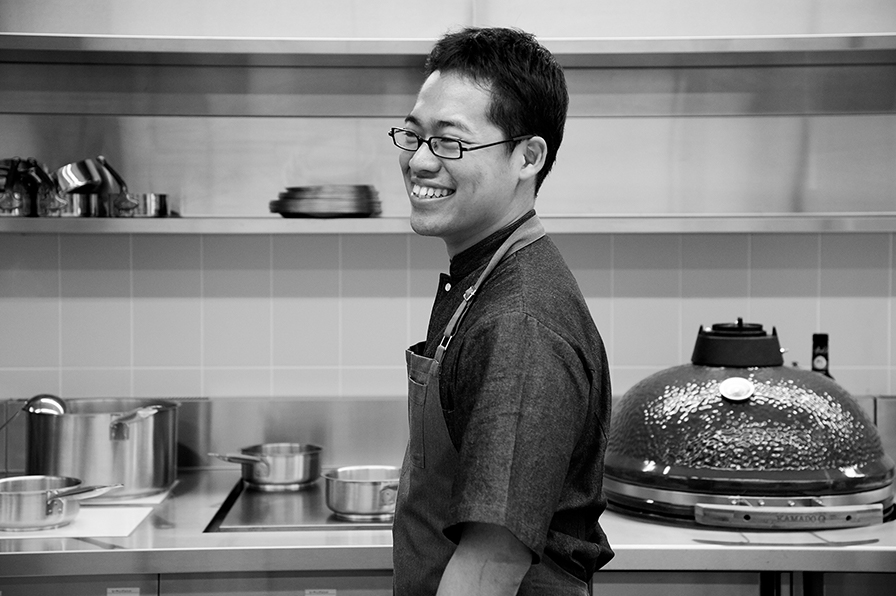 Born in Kanagawa Prefecture.
He joined this industry led by the delight of Italian cuisine, which he learned from trattorias in Japan. After travelling to Italy and receiving training at a restaurant with a good local reputation for its taste, he worked at “Ristorante TOKUYOSHI”, which received a Michelin star in 2015, and is said to be a restaurant representative of Milan regularly visited by food connoisseurs. He has returned to Japan for the first time in 8 years, after training at “Mielcke & Hurtigkarl” (Copenhagen) and “Gaggan” (Bangkok).
He works enthusiastically in hopes that young people will be able to experience the joy of dining at an authentic restaurant. His forte menu is a simple pasta that maximizes the quality of the ingredients. He has the unique career history of having been a police dog trainer.

Born in Lombardy, Italy.
He joined this industry because he wanted to work all over the world. After working as a receptionist and service staff, he went on to become manager and gained experience in places such as Italian Michelin 3-star restaurant “Gualtiero Marchesi” (Milan). Attracted to the Japanese people’s love for their own country, he came to Japan in 1990. After El Toula (Minami Aoyama), Enoteca Pinchiorri (Ginza), and Cafe Francaise Taillevent Robuchon (Ebisu), he started working for FARO Shiseido in 2004. Manager since 2014.
His top priority is to deliver “deliciousness” with a story, and works to build a team as a partner for customers. He is fluent in 4 languages (Japanese, English, Italian, and French). 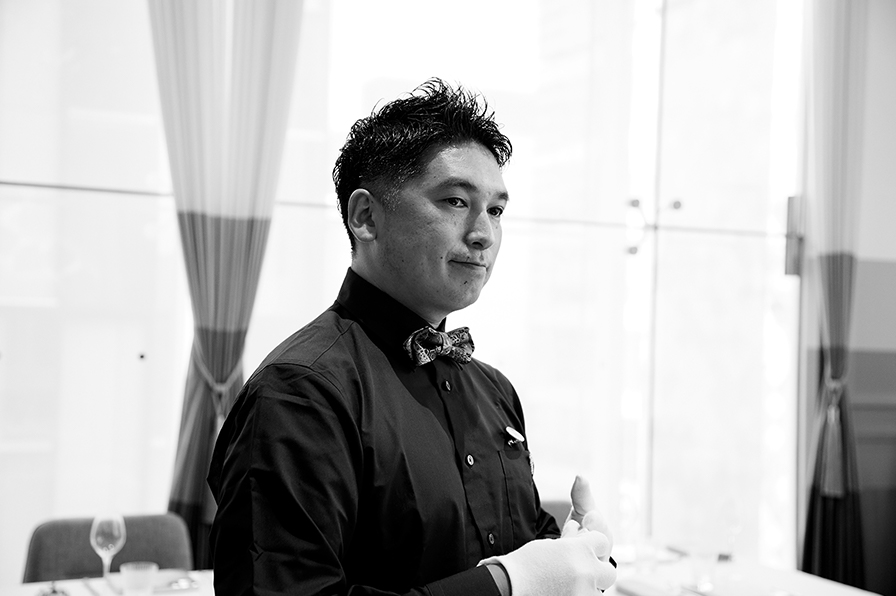 Born in Gunma Prefecture.
Having started as a cook, he has worked as opening staff at “FARO Shiseido” since 2001.He became a sommelier in 2004, and came in top place in the 2009 JETCUP Italian Wine Sommelier Concour.
At the newly reborn FARO, he passionately selects wine from different countries, as well as non-alcoholic drinks, and even Japanese tea and black tea. He works to achieve a pairing that values Japanese culture and tradition, as well as the hearts of the producers. 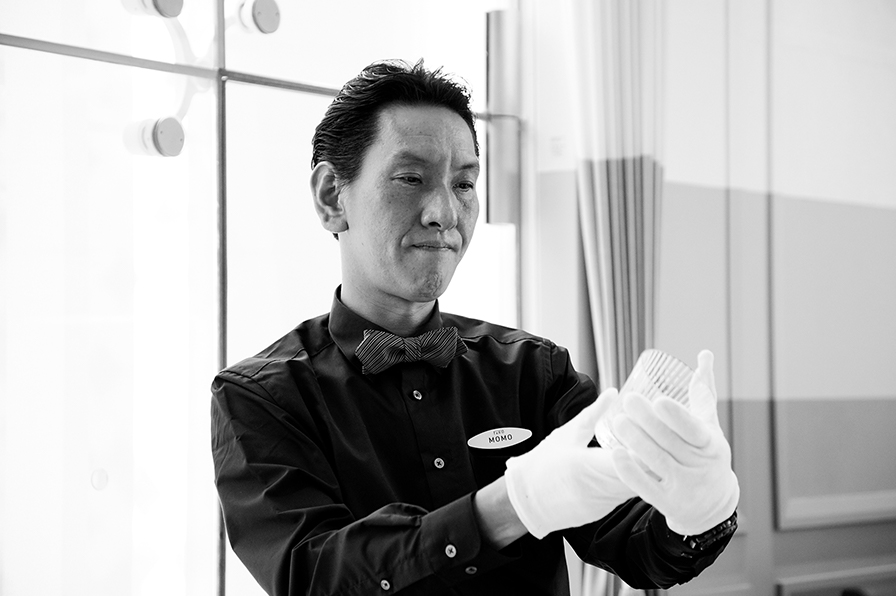 Born in Nagano prefecture.
Having developed interest in the refined Italian culture and arts, he aspired to become an Italian cuisine chef. He was also attracted to the locality and diversity, and went into the food service industry while studying about wine. After working as service staff at an Italian restaurant in Tokyo and as manager at “El Toula” (Minami Aoyama), he has worked as opening staff at “FARO Shiseido” since 2001.
He encountered the eye-opening Japanese cuisine culture and the brilliance of culinary craftsmanship at the newly reborn FARO, and is working to acquire even deeper knowledge. 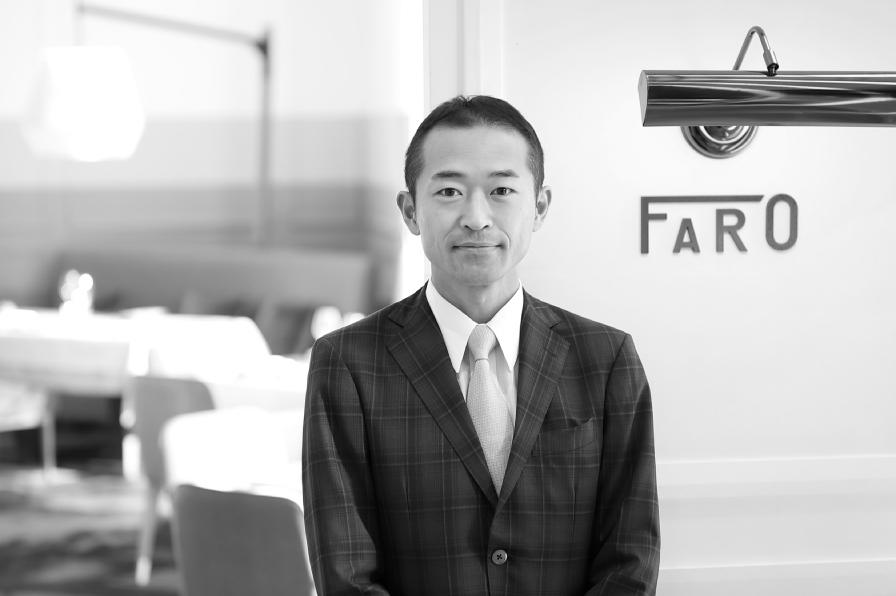 Born in Chiba Prefecture.
He started in the restaurant world aspiring to be a chef, but became fascinated by the service profession and changed direction. Seeking to offer unsurpassed hospitality, he gained experience at “L’Osier”, “FARO Shiseido” and “LE SALON JACQUES BORIE”.
At the newly reborn FARO, he is deepening his expert knowledge of special coffee, aiming to provide a moment of bliss after a delicious meal. He also has a full marathon record of 2 hours 29 minutes 7 seconds.